A new strain of salt-tolerant bread wheat will begin field trials this year. 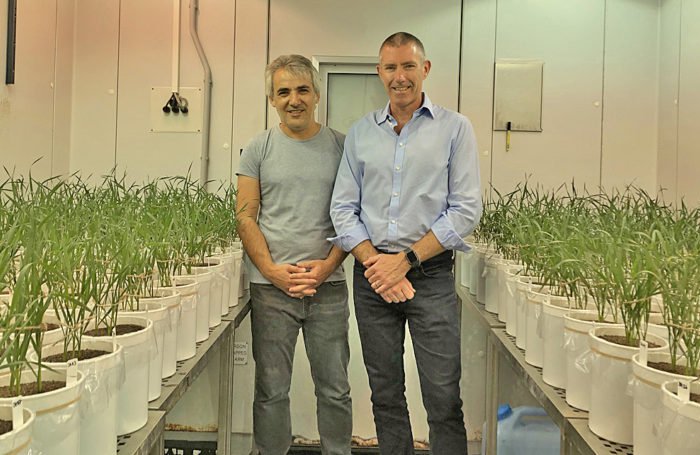 A new strain of salt-tolerant bread wheat with genes that can be traced back to wild relatives will begin field trials in Australia this year.

The line known as MW293 has been dubbed “golden goose” by researchers not only for its impressive production but because it takes up large amounts of salt from the soil into its leaves. This challenges previous literature that suggests successful saline tolerant varieties should not absorb much salt.

Researchers in South Australia have been working on the project since the first cross was made between US germplasm W4909 and popular Australian bread wheat variety Mace in 2011.

The ‘super line’ was then crossed for a second time with Mace to produce a line that thrived in saline soil lab trials, producing twice the grain as Mace in salty soil and also outperforming it in non-saline conditions.

“I couldn’t imagine a bread wheat that could accumulate this much salt yet it would be so tolerant because it goes against the current low-salt paradigm,” the project’s lead researcher Dr Yusuf Genc from the South Australian Research and Development Institute (SARDI) said.

“I call it Golden Goose because to me it’s magical, I’ve never seen anything like it.

“When we did the analysis of the leaf, what we found was just incredible, there was 100-fold more sodium in the leaf than we normally see in bread wheat varieties. It’s very exciting because it’s got more salt and more yield, which was not the paradigm at the time because everyone was chasing the idea of sodium exclusion leading to increased yield but that was not the case so it surprised us in a good way.

Salinity (presence of salt) and sodicity (presence of sodium) are major constraints to global cereal production. Despite significant international research efforts, farmers in marginal areas are yet to reap the benefits.

Dryland salinity is a major problem for broadacre farmers in Australia, particularly in areas with low rainfall. However, many other wheat producing nations with salinity issues such as the United States, Iran, India and China could also benefit from the research.

The research by Dr Genc’s team was published in the journal Frontiers in Plant Science in October.

This year’s field trial will be carried out by SARDI and its research partners at South Australian sites near Roseworthy (non-saline) and at Red Hill (saline) in the state’s Mid North or an alternative saline site.

Two novel populations have been developed to investigate genetic control mechanism of the salt tolerance trait. These are, a doubled haploid population of 200 lines, and recombinant Inbred Line Population of 2000 lines.

This year, field trials will use seeds from about 200 doubled haploid lines from Mace/MW293 cross in saline and non-saline conditions. Next year, the second population of 2000 lines, which contains greater genetic diversity, will be trialled.

Dr Genc said the germplasm needed to perform well in both conditions as salinity levels varied from field to field and season to season.

He said a commercial variety was still several years away.

“Our purpose is to get a genetic marker that is linked to the new salt tolerant trait and then use that marker in breeding. This will rapidly speed up the breeding process. We could end up with a variety that is a direct selection from the original lines we developed and that would be fantastic.

“But if we don’t then we can still use the marker to make other varieties better – once it’s proven, the breeding can be done with any variety.

Dr Genc said the initial work introduced the salt tolerant gene(s) into the bread wheat germplasm line Chinese Spring from a line known as W4909 that was developed from wheat wild relatives and released by the USDA-ARS and Utah Agricultural Experiment Station in 2002.

“The team in the US did an amazing job developing the W4909 germplasm. It was released with no restriction for use in developing salt tolerant lines but as far as we know, it was not utilised in breeding programs presumably due to its high salt concentration in the plant,” he said.

“I’m assuming it was considered a dud. We thought it had something special as it grew very well under salinity. We were not discouraged by the fact that it had high salt because our early work in bread wheat already showed that there was no correlation between sodium exclusion and the tolerance to salinity.”

Led by SARDI, the research division of Primary Industries and Regions SA, the work was also supported by the University of Adelaide, the University’s Waite Research Institute and The Yitpi Foundation.