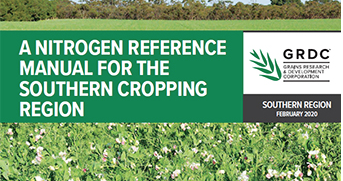 To support growers and advisers in understanding the in-season nitrogen (N) requirements of crops, the Grains Research and Development Corporation (GRDC) has published A Nitrogen Reference Manual For The Southern Cropping Region.

The manual, available for viewing and downloading via https://grdc.com.au/a-nitrogen-reference-manual-for-the-southern-cropping-region, is a comprehensive guide to understanding, managing and estimating N requirements from paddock to paddock and season to season.

“However, waiting for visual signs of nitrogen deficiency, such as pale leaves and low tiller numbers, will mean yield potential will have already been compromised.

“While there are some useful rules of thumb that can help growers with their nitrogen decisions, nitrogen budgeting approaches that are timely and take into account nitrogen supply from fertiliser, soil mineral nitrogen and the likely mineralisation of organic matter are needed for more accurate nitrogen management,” Assoc Prof Denton says.

“Monitoring soil moisture and nitrogen and careful management of nitrogen inputs is vital to ongoing productivity.”

The manual includes information about the various N decision support tools available to growers and advisers.

The GRDC has invested in a preliminary assessment of tools for estimating N mineralisation during crop growth in the southern cropping region.

GRDC Manager Soils and Nutrition – South, Stephen Loss, says insufficient supplies of N from the soil and fertiliser inputs are important factors in the difference between yield achieved by growers and their crop’s water-limited yield potential.

“Data indicates soil organic matter contents are declining in most cases and the nitrogen being removed from the system is not being adequately replaced by fertiliser applications or fixed by legumes in rotation.”

Dr Loss says a separate GRDC investment had recently monitored some 200 paddocks across Australia for three seasons and while most crops did not have a major yield gap, many in high rainfall conditions were not achieving yield potential largely because N supplies were insufficient for their demands.