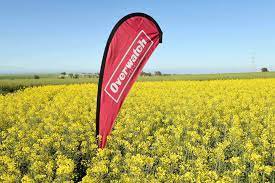 Mr Cronin said the lack of consistency from post-emergent chemistry meant pre-emergent options were heavily relied upon, and it was important to use every option in the armoury.

“You have got to have it in your rotation one in four years. If we're going to be totally reliant on pre-ems, you can't just keep using one or two.”

The Forbes region is a mixed cropping area of Central Western NSW that has seen a swing away from pastures towards no-till systems, bringing emerging challenges with different types of weed species.

“Ryegrass would be the biggest,” he said. “There's plenty of broadleaf weeds that rob yield, but ryegrass is probably the biggest worry to everyone because of the resistance level.”

Overwatch Herbicide, from FMC was in its first year of commercial release this past season and Mr Cronin said they utilised it in paddocks across the district.

He said on one farm west of Forbes, Overwatch Herbicide was applied to both wheat and canola paddocks and did a particularly good job controlling the weeds throughout the season.

“The weeds on that place were predominately ryegrass, with wild oats, milk thistle, prickly lettuce and capeweed,” Mr Cronin said. “It was mainly the ryegrass that we had the Overwatch down for.

“We sowed deep, and we got in early (mid-April). There was a perfect start and once we hit late May it did not stop raining. Anyone that got their wheat sown by late April or early May were home and hosed. Overwatch Herbicide did a phenomenal job. We didn't notice any issues.”

He said the way Overwatch Herbicide turns the ryegrass pink was also quite novel.

“FMC through their tech note did a good job of advertising that and the farmers got excited when they actually saw it. There's nothing else that colour in the paddock. It does stand out.”

Mr Cronin said there were some crops in the district that showed damage from pre-emergent herbicides although there were a number of factors involved.

“In Forbes we're about a 500mL per year rainfall zone and this year we're about 840mL. Usually, those wetter years is when we see some pre-em damage.”

“We had some Sakura in other paddocks, and we had Treflan, Boxer Gold and some others and I don't think you could differentiate between the crop damage at all in any of them.

He said later planted crops with high stubble loads and shallow sowing seemed to be most at risk.

Mr Cronin said Overwatch Herbicide can cause bleaching as the crops metabolise the herbicide and Nutrien Forbes had communicated this to their growers.

“FMC did a good job getting the message out to the advisors that it does bleach, especially in canola. We did make sure the growers were all aware and FMC had their tech sheets and some pictures.”

He said growers had also conditioned themselves to sow seed shallower with the no-till systems, but he was advising clients to go deeper to counteract the potential effect of pre-emergent herbicides.

“You'll get it some years where we sow too shallow, and you get a dump of rain, and you will get herbicide damage from all the major pre-emergent chemistry.

“We got really good results last year for crop safety with seed placed three-and-a-half, to four centimetres deep. The ones we got damage with, with all the pre-ems, were all sown at two to two-and-a-half centimetres,” he said.