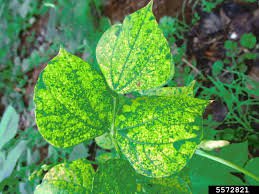 “We tested more than 1800 plants and it was clear the main culprit was BYMV. In several paddocks the effect of this virus was aggravated by co-infection of AMV,” Mr van Leur said.

“In combination, these two viruses can have a lethal effect on faba bean plants, but fortunately this situation has been limited to a few very severely affected paddocks.”

The Tamworth-based pathologist’s research is supported by investment under the Grains Agronomy and Pathology Partnership (GAPP) between NSW DPI and the Grains Research and Development Corporation.

As part of this work Mr van Leur tested plant samples for multiple viruses, with BYMV detected in plants showing symptoms such as stunting and tip and stem necrosis.

“However, these symptoms are not normally associated with BYMV so we are doing pathogenicity tests to determine if we are dealing with ‘new’, more severe pathotypes of this virus or a new virus, but this will take time to assess,” Mr van Leur said.

“GRDC investment collaboration with colleagues in Queensland and Western Australia will also allow us to undertake molecular comparison of BYMV strains isolated this year with strains collected in previous seasons.”

Mr van Leur’s NSW DPI team is currently working to understand the reasons behind the frequency and severity of the virus induced symptoms observed in the region.

This work will be assisted by a GAPP investment focused on understanding aphid ecology in northern NSW and the role different aphids play in transmitting viral infections.

“Both BYMV and AMV are understood to be seed transmitted in medic. Medics are also a preferred host for cowpea aphids.

“My hypothesis is that cowpea aphids multiplied on the freshly emerged medics in March and picked up the viruses and moved into faba bean crops in May.

“The virus infection patterns in the faba bean crops indicate that after the early infection, secondary infection in the crops occurred by wingless, colonising aphids.

“We plan to investigate the role of pasture legumes in the virus epidemiology of crop legumes in more detail.”

He said other factors likely to have played a role included:

Mild autumn temperatures allowing aphids to multiply in the crop and spread the virus;
Lack of standing stubble and irregular emergence of older seed, which can result in higher aphid landing rates;
Early sowing of faba bean.
Mr van Leur said it was, unfortunately, at this stage it was impossible to predict epidemics of this nature and when they might reoccur in the future.

He said seed transmission of BYMV in faba bean seed had also been reported, yet his earlier research showed that this was very uncommon.

“We are currently testing faba bean seedlots, and growers and advisers are welcome to send us newly harvested seed for testing.”

Mr van Leur said the situation this season was also likely to prompt growers to consider imidacloprid as a seed dressing in the future.

“Imidacloprid is a slow acting systemic insecticide that will not prevent the first crop infections by BYMV and AMV, as a quick probing by a viruliferous aphid is enough for a plant to get infected,” he said.

“It is likely imidacloprid will reduce aphid population significantly during early plant growth and I have recommended it in the past for environments favourable for infection by persistently transmitted viruses like Bean leafroll virus (BLRV), transmission of which require longer periods of aphid infestation.

“But I would hesitate to advise widespread use of imidacloprid to control non-persistently transmitted viruses like BYMV and AMV.”

Mr van Leur said given the role aphids play in the transmission of viruses such as BYMV, it was critical that industry understood more about aphid ecology in northern NSW.

Research to improve understanding of aphids across the northern region is part of work being undertaken by NSW DPI entomologist Zurica Duric as part of a GAPP research investment.