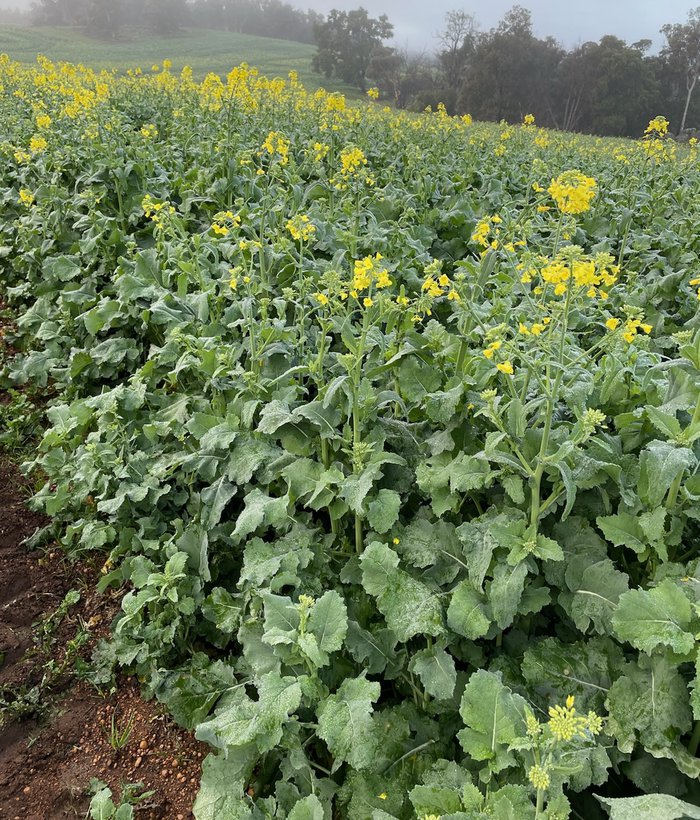 WA agronomy consultant Courtney Piesse of Agronomique Services, was involved in farm-scale trials of some of the new fungicides last season and liked what he saw.

Mr Piesse said one of the fungicides, Maxentis EC from Adama Australia, was particularly unique in bringing together azoxystrobin and prothioconazole active ingredients to combat diseases in canola.

“It’s the only fungicide we have for canola with that combination of active ingredients,’’ he said.

“Prothioconazole is the latest, Group 3 DMI (demethylation inhibitor) chemistry, that we know provides very good activity on canola diseases, and with azoxystrobin it becomes an extremely powerful product.

“Maxentis is a co-formulation of these two really active chemistries. It’s not like Prosaro with two DMI (active ingredients). It has the QoI (quinone outside inhibitor) strobilurin chemistry, so it offers a bit more protectant power.’’

“For growers, it’s all about dollars per hectare, your disease spectrum and rotating your products, and Maxentis is another product you can now add to the mix that offers one of the broadest spectrums for disease control,’’ Mr Piesse said.

“It’s such an adaptable product that you can play around with to suit your individual situation – and it’s like having one product for all things,’’ Mr Piesse said.

He said his experience with the new dual mode of action fungicide last season was for targeting sclerotinia in canola and net blotches in barley.

“Sclerotinia was a problem in patches last year, especially with early-sown crops that bulked-up and where there have been tight rotations and big crops over the past five to six years.’’

Mr Piesse said Maxentis was applied as part of a farm-scale trial north of Williams after sclerotinia was discovered in a canola crop at the bolting stage, when the typical disease expression occurs as florets fall onto lower branches, setting up infection.

“It was a very big and high crop on lupin stubble. The sclerotinia pressure was very high and it was heavily infected. As a result, we sprayed it at about 10 per cent flower, also so we could get on the paddock because it was very wet. They got bogged doing the trial.

“The application kept the crop’s nose clean for the rest of the year. It halted the disease progression and there was minimal development of new infections and no lodging later, despite being a big, dense canopy.’’

He said the fungicides in the trial were applied with UAN liquid fertiliser and there also was more green leaf retention from the azoxystrobin in the Maxentis treatment, along with an application of Veritas – another Adama Australia product containing azoxystrobin in a co-formulation with tebuconazole.

“There was definitely some greening effect from the azoxystrobin. You could see the green leaf retention and it was a happier crop, enabling it to take advantage of the favourable seasonal conditions.’’

The GT-53 Roundup Ready hybrid canola crop achieved a yield of around 3.2 tonnes per hectare at harvest.

Depending upon conditions on the grower’s property this season, Mr Piesse said Maxentis is again expected to be one of the key options as part of a two-spray strategy.

With SDHI (succinate dehydrogenase inhibitor) fungicides commonly applied to canola and cereal seed, Maxentis was one of the few alternate mode of action fungicides that could be used as the first foliar application to ensure good resistance management practice.

This is especially important in canola, where limited genetic resistance has contributed to increased stem canker and upper canopy blackleg infection in recent years.

Mr Piesse said Veritas, which also can be used in lupin crops, was another option for important fungicide rotation and its affordability presented an opportunity for alternative disease control strategies.

“Growers could apply it early, when there is less pressure, go over their paddocks without spending big bucks for protection and know that they are also managing resistance well.’’

“Sclerotinia needs to be well managed in crop rotations, as it can be found across multiple crop types and once the sclerotia are present in the soil, the appropriate environmental conditions are all that is required to flare up the disease during a season,’’ Mr Addison said.

“We are doing a lot of work in the disease prediction and modelling area and sclerotinia is one of those diseases where we are seeing some very distinct differences in how it performs across different regions.

“It looks like soil temperature could be having a key influence, with some joint research with WA’s Department of Primary Industries and Regional Development (DPIRD) in lupins last season highlighting some of these differences.’’