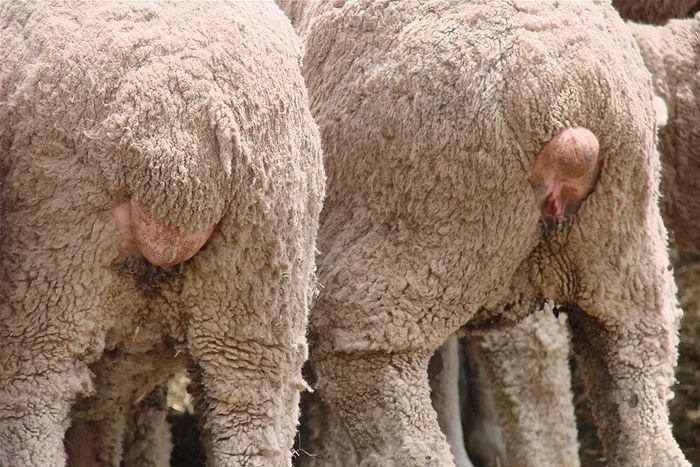 Mulesing involves cutting wrinkles of skin away from a lamb's breech to prevent the build-up of faeces, which can attract blowflies that lay maggots.

Pain relief has been available for close to a decade and is widely used in the sheep industry, but is not mandatory.

Victoria to lead the way
It is understood that the Victorian Government has included mandatory pain relief in revised animal cruelty legislation soon to be put out for public comment.

Victorian Farmers Federation Livestock Group chairman Leonard Vallance said the draft legislation had the organisation's full support, and it would not have a major impact on the industry.

"We did an estimate of over 90 per cent of people in Victoria using pain relief anyway, because it gives a much better result with recovery of lambs," Mr Vallance said.

"There's a lot of pressure on the industry to address the issue of mulesing.

"One way is to find viable alternatives to mulesing through genetics or through a different mode of removing the wool from around the breech of the sheep.

"But in the interim, the industry is still strongly reliant on [the] surgical procedure, and that needs to be done with pain relief."
Mr Vallance said the use of pain relief was important in protecting farmers' social licence to farm.

"We don't have a God-given right to be farmers anymore," he said.

"We are very subject to public perception of what we do and we must be very open and transparent about what happens on our farms."

WPA president Ed Storey echoed Mr Vallance's argument that pain relief benefited both the animal and the marketability of wool.

"Mulesing is a confronting thing for some people," Mr Storey said.

"But in many cases across Australia it is the best welfare outcome for the life of a sheep — but we believe it must be done with pain relief.

"We're concerned that all the talk in the market is about non-mulesing — we want to get out and defend mulesing.

"If everyone is using pain relief, that is possible. "Without it, that is very tough."

"We're advised by Animal Health Australia that most of them are going to [amend] existing regulatory frameworks," he said.

Wool broker lends his support
NSW based wool broker Don McDonald sits on the board of AWI, and runs Merinos in the central west as well as near Brewarrina in the far western rangelands.

Speaking as a woolgrower and a broker, Mr McDonald said mulesing should be accompanied by pain relief.

"AWI does not get involved in the agri-politics of an issue like this, but pain relief is best practice," he said.

"It should be done because it's best practice, and AWI is all about best practice."
Opposition to mandated pain relief
The peak farm group in New South Wales supports and encourages the use of pain relief but does not want it to become mandatory.

The chairman of the NSW Farmers Wool Committee, Andrew Wood, recently resigned from his director position with Wool Producers Australia because of what he called a "conflict of interest".

While he supports pain relief, he does not support a mandate because he disagrees with the idea of more regulation.

"The issue is the word mandate, because once you move to that sort of way of thinking … it is a very concerning change in psychology for Australian agricultural production," Mr Wood said.

"The concern is, where will this demand for pain relief stop? "It can become quite prescriptive.

"It's like other people telling us what we should be doing on our properties."

A recent survey indicated that 86 per cent of NSW Farmers members are using pain relief.