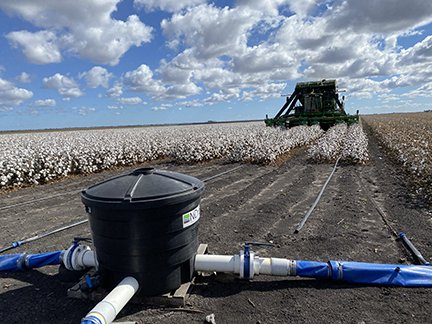 N-Drip has customers and partners in 20 countries around the world, including major corporations, NGOs and governments in the US, Asia and Africa, says N-Drip Australia’s General Manager Udi David Stern.

“PepsiCo recently partnered with the company to test its technology in pilot projects on farms across India, Vietnam, and the US, with impressive results – crop yields are improved, fertiliser usage is reduced and 50% less water is consumed compared to flood irrigation.

“Private customers too are reaping the rewards of installing the N-Drip system. Queensland-based farmer, Gary Spotswood has installed N-Drip in sugar cane fields that were previously flood irrigated.

“My sugar cane infrastructure wasn’t set up for drip irrigation, but N-Drip just tapped into the same outlet he had been using for flood,” Mr Spotswood said.

Having already installed a conventional drip system in another field to irrigate organic zucchinis, he was able to make a direct comparison. As well as simpler setup, N-Drip delivered significant energy savings, due to its very low-pressure requirements.

“My yields have been the same with both drip systems, but energy consumption with N-Drip is about two thirds less than the conventional drip.”

Cotton growers, among Australia’s biggest water users, are also reporting excellent results with N-Drip. Queensland cotton farmer Howard Rother credits the system with delivering record yields, having achieved growth that surpassed all expectations, resulting in his nomination for Cotton Grower of the Year.

Mr Rother installed N-Drip on 11 hectares of single skip cotton, achieving a yield of 11.5 bales/ha compared to 7.5 bales in the flooded fields, while using 26% less water.

“I’ve seen a massive difference between my fields with and without the N-Drip system,” Mr Rother said. “The trial has been particularly effective, because we had a dry spell from November to January which caused problems for the flooded fields, but the N-Drip system continued to operate well.”

The cost of installing N-Drip in a single skip row configuration, ranges from $1100 to $1300 a hectare, while solid is between $1400 to $1700 a hectare. With the exceptional results Mr Rother achieved, his system has paid for itself in one season.

Unsurprisingly, he was keen to extend its use, which was easily done. An 11-hectare system like his can be scaled up 10 times, provided there is adequate water.

“There are no technical limitations preventing much larger scale projects, and this is starting to happen,” Mr David Stern said. “We are currently working on several blocks, ranging from 70 to 140 hectares.”

Mr David Stern said the key to N-Drip’s success is its unique, patented dripper which ensures water flow even at low pressure and enables the use of unfiltered water for irrigation.

The company received the World Bank award for Excellence in Disruptive Technologies, in recognition of the fact that its technology could potentially replace the less efficient, but most commonly used practice of flood irrigation.

According to Mr David Stern, the company’s technology is a “game-changer” for large and small operators across the agriculture sector.

“There is huge potential for N-Drip to replace conventional irrigation practices for many broadacre crops like cotton, maize, sorghum and most vegetables, including potatoes,” he said.

“N-Drip outperforms any flooded block. The better the field is levelled, the greater the outperformance in terms of yield and water usage. In many cases, the system has paid for itself in one season.”

“Whereas conventional drip can’t be plumbed everywhere across the farm, with N-Drip I can move to another field further away without having to run a high-pressure system to the new location, which helps me rotate crops,” Mr Spotswood said.