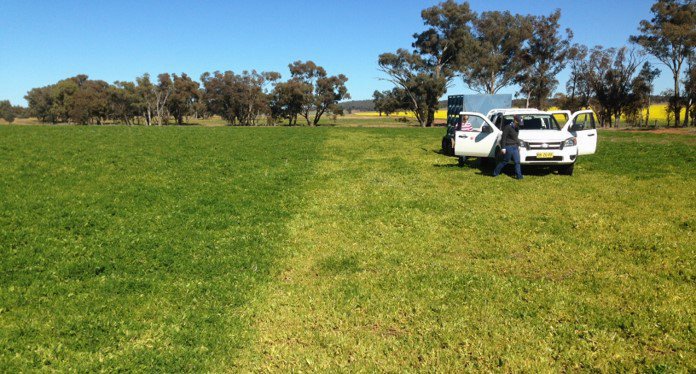 The Australian R&D company is now in its sixteenth commercial season supplying a range of dry granular legume inoculants that provide many new application options and freedoms not afforded to the traditional peat slurry method of legume inoculation.

Much of the logistical freedom provided by Alosca inoculants is underpinned by the nature of the product to protect the viability of the incorporated nitrogen fixing root nodule bacteria from temperature and moisture stresses commonly encountered during minimum tillage operations.

Independent evaluation at Murdoch University’s Centre for Rhizobium Studies has shown that the favourable environment for rhizobium in Alosca’s inoculant carrier system provides enhanced bacterial survival when seeding to dry or marginal conditions and/or delays in germinating rainfall occur.

“Alosca inoculants provide an advantage as they activate on the same seasonal triggers as the sown legume, maintaining the viability of the rhizobia bacteria until required by the plant at and after germination,” said Alosca Technologies business development manager Floyd Sullivan.

“Rhizobium delivery products reliant on cool and moist conditions to maintain high numbers of cells are often left prone to failure under the constraints placed on them by evolving farming systems and changing seasonal conditions, with a high proportion of inoculant cells perishing before nodulation initiates.”

Field evaluations have shown Alosca granules can be effectively mixed with seed or fertiliser on-farm and sown into moist or dry seeding conditions. The unique buffering properties of the carrier clay also make it possible to apply pesticide seed dressings typically harmful to legume inoculants.

The new application options, coupled with the unique ability of the granule to activate on the same seasonal moisture triggers as the sown legume, have seen growers identify the advantages of the Australian developed range of inoculants.

These key attributes have been central to grower uptake which now has Alosca distributing product throughout Australian cropping and pasture zones, as well as seeing growth in its overseas development projects.

Simplicity is the key – not to over-mix the product before transferring it to the seeder. Growers report adequate mixing can be achieved through the regular transfers of fertiliser or seed from the shed or silo to the grouper bin and then onto the seeder. Alosca-fertiliser mixes should then be delivered single shoot and not banded separately to the seed.

Mr Sullivan said Alosca Technologies has met many of the limitations of peat-based inoculant delivery and developed many new usage options such as top dressing and head start inoculation.

“Alosca’s novel method of top dressing – spreading the Alosca granules with fertiliser or lime – can reinvigorate old pastures,” he said.

“Drilling granules with cropping fertiliser or seed in the season prior to the pasture coming back into the rotation, to introduce new more effective strains of inoculant to the soil, is also effective for pastures.”

Alosca’s granular head start inoculation, incorporated with cropping fertiliser the year prior, provides a cost-effective option to introduce new strains to pasture seed banks without adding inoculants to pasture coming back into the rotation.