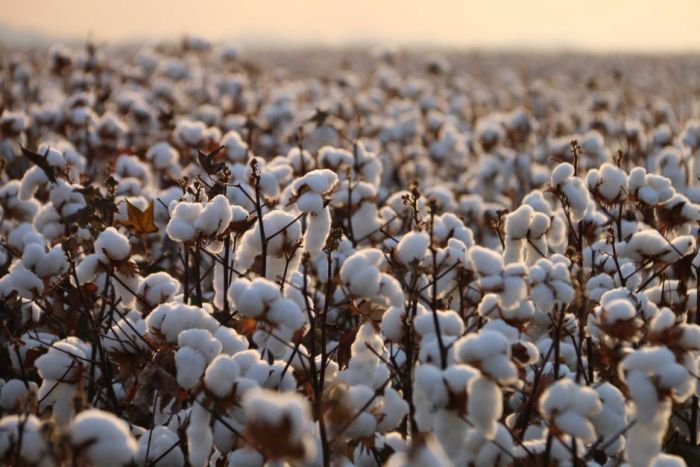 Conservationists have labelled the idea "stupid and dangerous" and warned of an "uproar" if it happens.

The nation's cotton sector is heavily reliant on genetically modified varieties — 99 per cent of the cotton grown in Australia is modified to be insecticide tolerant and Roundup ready.

The 1,500 farmers who produce cotton are split between New South Wales and Queensland, with a handful in Victoria, but the ban on GM crops in South Australia has been a barrier for the industry in that state.

The South Australian Government has announced it plans to terminate the 16-year ban in December following an ongoing consultation period, potentially opening the door to cotton.

"If you look at it on a national scale in terms of an expansion into SA and northern Australia it's about being able to supply our overseas producers," Sally Ceeney from Cotton Australia said.

"Cotton from Australia is seen as really high quality and is in such high demand across the world. So if we can give producers overseas a more reliable supply of cotton, that's only good for our industry."

SA regions identified for cotton
A 2014 scoping study by the Cotton Research and Development Corporation identified southern regions as new possible growing areas, but that "bans on genetic modified crops are a current impediment to establishment of cotton within … South Australia".

Ms Ceeney said SA's Riverland region — currently known for its wine and citrus production — would be best suited to grow GM cotton once the ban ends.

"Cotton is quite an adaptable crop and probably more adaptable to different climatic conditions than what we would have thought 10 years ago, and the introduction of GM traits have helped that," she said.

"The GM traits along with improved breeding [methods] means the cotton can be grown in a shorter season, which has meant areas like southern New South Wales, northern Victoria, and potentially South Australia, could see cotton production."

A question of water
Greens Senator for South Australia Sarah Hanson-Young labelled the idea of cotton being farmed in SA as "madness".

"It is very concerning that big corporate cotton — after stuffing up the Murray-Darling Basin upstream — wants to come to SA and use even more water to grow cotton in SA," she said.

"The idea that we spend our precious water growing cotton in South Australia is stupid and dangerous.

"Our water resources are precious and we are facing a dramatically drying climate, the last thing we need is big corporate cotton taking more water."
In a 2018 submission to South Australia's independent review of the GM moratorium — which ultimately found the ban had cost the state's farmers $33 million — Cotton Australia said some SA farmers had expressed interest in growing cotton but could not because of the ban.

"I'm not sure on the number of farmers, [but] I can't see why there wouldn't be any interest from farmers in SA," Ms Ceeney said.

"There is certainly cotton being grown not far over the border in the Mildura and Wentworth areas, so it's not that far away to move into SA."

The news has been welcomed by the South Australian Government, with a spokesperson saying the main reason the GM moratorium will be scrapped will be to give farmers more choice on what crops they would like to grow.

"We are currently out for consultation [on ending the ban] but the fact this announcement has already seen other sectors looking to establish here in South Australia is a positive," the spokesperson said.

"South Australia is open for business and we welcome any investment that would help grow our state's regions."

Conservationists concerned
Many South Australians have traditionally been opposed to the growing of cotton upstream in the Murray-Darling Basin, with many worried it was having environmental consequences downstream.

Craig Wilkins, the chief executive of the Conservation Council of SA, echoed those concerns, and said there would be an "uproar" if farmers planted cotton.

"I have no doubt people would react strongly about this," Mr Wilkins said.

"I can imagine a lot of local communities would be very nervous about this type of new industry coming into a system that is already struggling.

"The idea that SA — which is already struggling with potentially moving into a long-term dry period — would consider opening up the expansion of a crop that has caused the river such problems would face enormous community opposition.

"People in South Australia see what has happened upstream in the Darling River and there is a lot of concern about future flows, and like it or not cotton is seen as one of the reasons the river is in such stress at the moment."

However, Cotton Australia said there would be no extra pressures placed on the struggling basin system if the cotton industry moved into SA, because the amount of irrigation water coming out of the river would not change.

"There won't be further allocation with a new industry. Growers with an allocation can't get more water. They just make a choice about what crop to use their water on," Ms Ceeney said.
"[Farmers base that decision on] whatever crop will give them the best return, whether that's a cotton crop, a maize crop, or a tree nut crop. It's up to the grower to decide."

However, Senator Hanson-Young said River Murray water allocations should be used to produce food, not fibre.

"The water that is there needs to be prioritised on the types of products and produce that sustain us. Our food bowl needs water. Big corporate cotton has enough already," she said.

Is the price right?
The deciding factor for South Australian growers will be price — if the expected returns for cotton are higher than their traditional crop, then they are more likely to consider switching.

Cotton is generally more profitable than alternative crops such as grain, sorghum, wheat, and oilseeds.

Whether farmers choose to grow it is also highly dependent on water allocations — drought and low water allocations resulted in Australia's 2019 cotton production being halved and those conditions are set to continue into 2020.

"It would be up to growers to come forward if they are interested in growing the [cotton] crop, and if they did come forward there are plenty of resources available to help them," Ms Ceeney said.