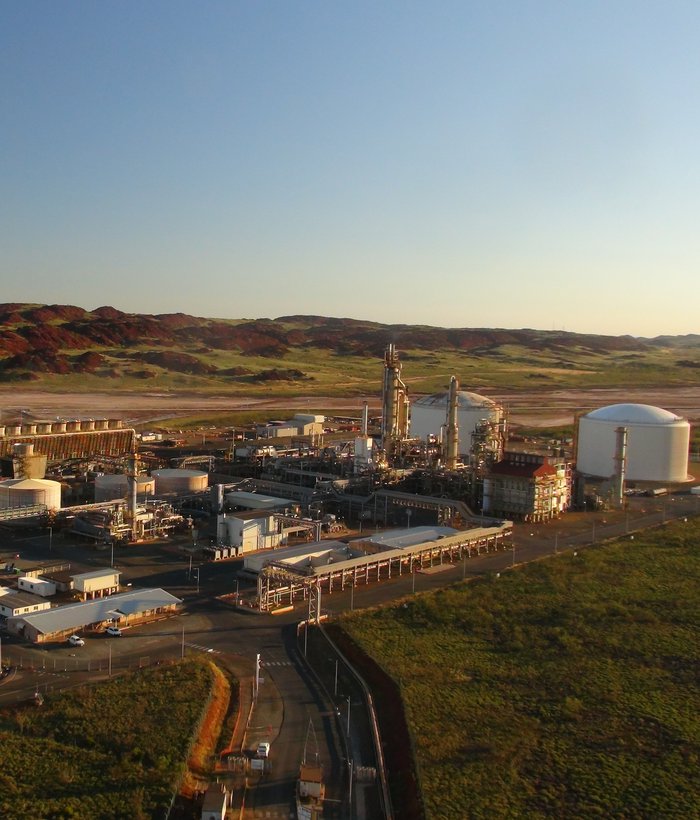 Ammonia is a core ingredient for many fertilisers used around the world but its production depends almost entirely on the use of natural gas as an input.

Under Yara's plans, the company would put solar power through an electrolyser to split water into oxygen and hydrogen, with the latter to be combined with nitrogen to produce ammonia.

Unlike conventionally made ammonia, the process would not lead to any greenhouse gas emissions.

Yara has partnered with French energy company, Engie, to build the plant.

Breaking the link' with pollution

Chris Rijksen, Yara's general manager in WA, said the aim was to break the connection between fertiliser manufacturing and greenhouse gas pollution.

Globally, the fertiliser industry is responsible for about 1.5 per cent of annual carbon emissions, largely because 95 per cent of production relies on natural gas as a feedstock.

"A molecule of renewable ammonia is exactly the same molecule as a conventional one," he said.

"It's just produced from a carbon-free source."

According to Mr Rijksen, key to the plan would be the cost of producing green fertiliser, which he insisted would have to compete with conventionally made products.

He said there was a chance Yara may be able to attract a premium for a carbon-free fertiliser, but this would only extend so far.

"It's absolutely true that we need to establish a market and we're actually talking to a lot of companies around the world and particularly in the Asian region," Mr Rijksen said.

"We see that there is a lot of interest in the Asia region; they're the frontrunners in trying to develop a hydrogen offtake economy in their countries.

"Countries like Korea … Singapore, Japan; they really want to develop that hydrogen economy."

MacTiernan throws in support
WA Agriculture Minister Alannah MacTiernan backed the proposal, and said a growing number of countries were keen to reduce emissions across their economies, including in food production.

Ms MacTiernan said most people would be unaware of the extent to which their diets relied on fertilisers.

"We have many people adopting veganism because they believe the real problem in agriculture is the carbon footprint of animals," she said.

"But, of course, if you take animals out of the system, you become much more dependent on the introduced chemicals such as ammonia through urea.

"So, really if people are very concerned about their carbon footprint we have to be looking at these fertilisers."

Cropping 'impossible' with fertiliser
For Simon Wallwork, who farms at Corrigin, about 220 kilometres east of Perth, there is no alternative to growing crops in WA, or many other parts of Australia, without fertiliser.

Mr Wallwork said he typically used between 400 and 500 tonnes of fertiliser a year to grow crops.

"Whereas we do have a good history of fertiliser inputs in Western Australia, it's something you need to do on a year-by-year basis, otherwise, you just won't grow the yields we need to make a return.

"It's an extremely important part of our system."
David Slade runs a mixed cropping and livestock enterprise at West Kendenup, about 4 hours south of Perth.

He said optimising fertiliser application was just as important for the environment.

"You can't put the macro elements on without making sure the micro elements are right first," Mr Slade said.

"If you have one element missing from your program, you're just wasting your fertiliser and it's just going down the creek, and that's not good for the environment."