Fall armyworm ‘not the end of the world’ 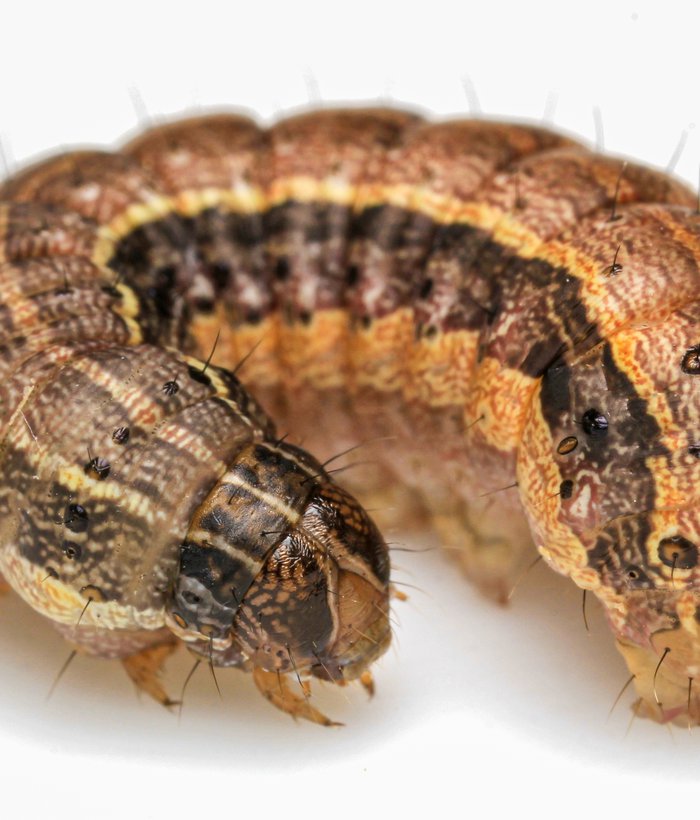 Brent Wilson from Nutrien Ag Solutions at Home Hill was the first person to find fall armyworm (Spodoptera frugiperda) in the Burdekin Irrigation Area and has been dealing with the new pest since early March.

Last week for the first time he sprayed a maize crop with chlorantraniliprole (Altacor®) targeting fall armyworm after monitoring revealed a significant infestation.

Mr Wilson said the decision to spray had been made after he found 60 to 70 per cent of commercial white corn cobs were infested with fall armyworm larvae in one 54 hectare paddock bordering the Burdekin River at Home Hill.

“This is the worst infestation we have seen since the pest arrived. Prior to this we had found an average of 13-15 per cent of maize cobs infested with fall armyworm larvae in any one maize crop,” he said.

“In comparison, the white corn crop at Home Hill had two larvae on most cobbs – one at the top of the silk and another one burrowed into the cob, behind the cob leaf and towards the base of the cob.

“We are hoping, given the crop is in the reproductive phase, that the damage won’t have a significant impact on yield. However, we did do an aerial spray with Altacor® as a control measure within 24 hours of discovering the scale of the infestation.”

“The general insect pressure in the Burdekin region this season is moderate to high, but what helps is the dispersal of these pests through a range of crops. Essentially having soybean, mungbean, chickpea, sorghum, maize and cane crops all within the irrigation area has a dilution impact on insect pressure,” Mr Wilson said.

“We have now found fall armyworm in chickpeas, soybeans and sorghum, but maize is definitely its preferred food source in our limited experience.”

Mr Wilson said he was optimistic the damage to corn in this case was cosmetic, but he warned that, left unchecked, the potential for the new pest to cause significant yield losses was high.

“Regular monitoring is absolutely critical. Get into the paddock. Mark out an area and check it two to three times each week. Make sure you are accurately identifying pests so you can make informed decisions about control measures,” he said.

The northern agronomist said in cases where fall armyworm larvae infestations in maize crops were below 20 per cent he had opted for regular monitoring rather than insecticide treatment.

“Australian threshold levels have yet to be developed, so we are still relying on the international experience and the advice of our counterparts in places like the United States,” Mr Wilson said.

“The overseas experience has also shown us how rapidly this pest develops insecticide resistance, so we need to use the chemistries we have in a controlled and measured way to ensure we have them when we need them.”

Mr Wilson was also keen to see an improvement in the sharing of information about fall armyworm numbers and spread.

“We need industry bodies to share their information about fall armyworm moth flights, as well as any data they have about spread and the build-up of numbers in traps, so growers and agronomists are as informed as possible,” he said.

Mr Wilson said he would also be supportive of the Australian industry investigating the potential of introducing and registering a fall armyworm virus, called FAWligen, that has been used as part of a suite of pest  management tool overseas.

“I think it could be worthwhile assessing whether this product could be bought into Australia and how it would work in our farming systems and what the risks might be to beneficial insects and other insect populations.”

In the meantime, Mr Wilson’s message to other agronomists was “don’t panic” the arrival of the pest was not “the end of the world”.

“We have control measures at the moment that are effective and with regular monitoring we can be strategic and considered about how we use these controls,” he said.

“And the stark reality is for many of us, including growers in the Burdekin, helicoverpa is still the number one pest threat.”

“The GRDC is also in the process of producing a series of podcasts to help guide grower and adviser decision making around fall armyworm,” Dr Khurana said.