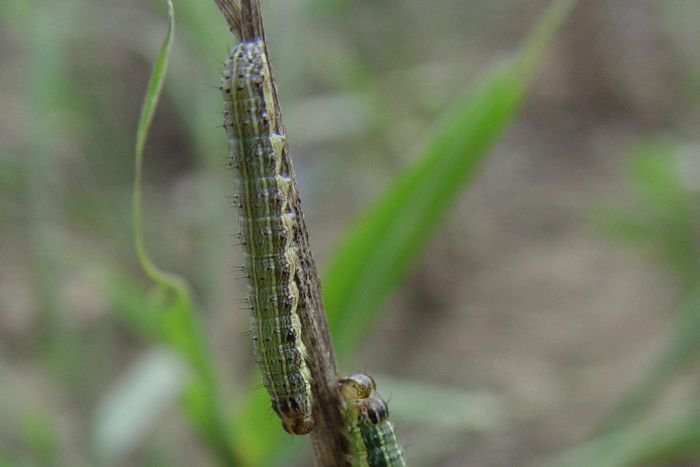 A handful of fall armyworms have been caught on the Torres Strait, prompting a biosecurity alert because of their potential to cause major economic damage to the agricultural industry.

The moths' larvae feed, in large numbers, on more than 350 types of plants, grasses and other crops, including rice, wheat, cotton, sugar cane, sorghum, and many fruit and vegetables.

In areas where the moth has taken hold, including the Americas, China, and South-East Asia, destruction of crops has happened almost overnight.

Agriculture Minister Mark Furner said the armyworms had caused "very alarming" damage to crops in those regions and posed a serious biosecurity threat in Australia.

"At this stage, there's no detection of any crops that have been damaged," he said.

"[But] these moths can fly up to 100 kilometres a night and are very destructive."

Biosecurity Queensland's Malcolm Letts said specialised moth traps would be placed across Queensland to detect and contain any further spread of the pest.

"Destruction of crops can happen almost overnight when population levels are high," he said.

So far only six have been caught in traps on Erub and Saibai islands. They were captured in late January.

However, Mr Letts is concerned the pest could already have migrated to mainland Australia.

"The traps are primarily used for surveillance purposes, so this is to actually try and find out how far this pest has spread at this point in time," he said.

"[The traps] have a pheromone lure in them that attracts the male.

"When it goes into the trap, there's a toxin in the trap that then kills the male."

Farmers across the state have also been asked to report any potential sightings of the moth and its larvae.

The fall armyworm is native to tropical and sub-tropical areas of the Americas and was first detected outside its native range in 2016.

Since then it has spread to Africa, the Indian subcontinent, China and South-East Asia.