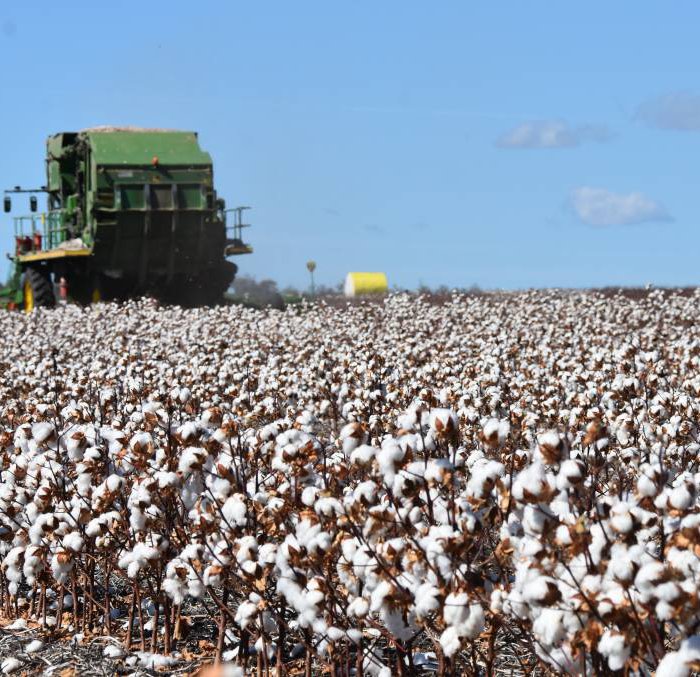 With cotton prices up, the Smiths were among many first-time cotton growers to plant dryland this season, off the back of no winter harvest last year.
The Smiths planted 370 hectares on the back of a 30 millimetre soaking in November, however since then they've had very little rainfall.

The rain over the past few weeks came too late to make any difference, but Lachie said they had enough subsoil moisture to get the crop through.

"We have very good soil here; the black soil and subsoil moisture got it over the line, while the little falls kept it alive," he said.
The Smiths were pleased with their yields considering the weather.

"It's good for the season; we'll take anything for a year like this," Lachie said. "It was the worst year ever to try cotton."
"We're pretty happy with the season considering we haven't had any rain," Angus added. AMPS Moree agronomist Tony Lockrey said the Smith boys have done "an exceptionally good job".

"They did a great job of giving the crop every chance to succeed," he said. "They did all the planning; they looked at the gross margins, they looked at their machinery and it was only the stripper that they've had to get in, everything else they've done themselves as they've got an adaptable suite of machinery to grow most crops."

Mr Lockrey said yields across the district are between three quarters of a bale up to 1.8 to 2 per hectare. "In a normal year, that's not viable," he said.
"You generally need to grow about 1.4 or 1.5 bales to the hectare to cover costs, but because prices are higher for seed and lint this year and growing costs have been quite low - most have only had one mirid spray and one herbicide spray - it's not too bad."

Although there was an increase in dryland cotton crops this year due to the high prices, Mr Lockrey said much of that volume hasn't been realised with little rainfall for dryland and little carryover water and reduced bore allocations for irrigated, resulting in an overall light season and below average yields.
"The earliest planted crops got a fall or two in crop, with a fall in November, but anything planted on that November rain had little to no rain," he said.
"And while it wasn't a record year in terms of record high temperatures, the consistently hot temperatures and high winds meant higher evaporation rates which saw irrigators run out of water quicker."

A number of crops out west were sprayed out or planted back in because they weren't going to cover the costs of stripping/picking.
However, despite the difficult season, the Smiths are keen to give cotton another go next year if they have enough moisture.
"It's been a good experience," Angus said.

"Tony Lockrey has been very helpful throughout the season, always contacting us and making the right decisions."
They said adding cotton to their summer crop rotation has given them different jobs and opened them up to new chemicals.
"It's allowed us to control different summer weeds through Roundup Ready," Lachie said.

The Smiths also had sorghum and corn in this season which were both harvested at the start of March, and although they're yet to do a cost analysis, they expect the cotton will out-perform both other crops.

At this stage the Smiths are not planting a winter crop this season unless it rains, as they, like many others, have zero subsoil moisture.
Mr Lockrey said 100mm is needed "to get us in the game" for winter crops.
"There's a few oat crops going in but not many people have adequate moisture to plant faba beans or canola at this stage," he said.