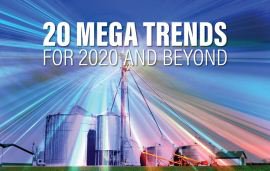 Cover Crops. Cover crop plantings surged to 15.4 million acres in the U.S., according to the 2017 Census of Agriculture. That trend will likely continue due to their role in soil health, nutrient management and carbon sequestration.

“Agriculture is the only industry that can prove it can sequester more carbon than what Mother Nature's already sequestering,” says Lowell Catlett, former economist at New Mexico State University.
Carbon Farming. In the next decade, private companies or government programs will be ready to pay farmers for keeping carbon locked in the soil. The global carbon market is estimated at $160 billion, according to a Refinitiv study.

The global precision farming market is expected to be worth $10 billion by mid-decade, per Grand View Research. Experts say combining that investment with advances in technology, data handling and artificial intelligence will spur relentless innovation.

Microbial Farming. Microbes, such as bacteria, fungi and protozoa, have the potential for major breakthroughs.

“I call it subterranean agriculture,” Catlett says. “We’re going to manage below the surface just as much as above it thanks to the growing interests in the microbe arena.”

The ag microbial market will be worth $6 billion by 2022, per Markets and Markets Research.

5G/More Connected Globe. More than 40% of the world lacks internet access. As investment pours in for rural broadband and 5G deployment, new opportunities will arise for connected farms.

“A lot of baby boomers struggle with tech but in 10 years many of them won’t be running the family farm,” says Jim Carroll, business consultant and author. “The person who’s running the farm will be the kid who’s never known a world without technology.”

Sensor Revolution. New sensors are helping monitor and manage livestock and crop production. David Hanson, biology professor at the University of New Mexico, has been attaching needle-sized sensors to plant leaves to monitor the fluid between cells. He hopes one day to be able to give a plant only as much water as it needs.

Internet of Things and Blockchain. By mid-decade connected devices could top 75 billion. Uldrich says in the next decade everything from cattle to fields will be connected to the internet.

Those connections and data will need its own language and tracking. The emergence of blockchain technology will help keep it all sorted and manageable.

“Blockchain technology is going to allow farmers to safely share their data with other farmers and even collectively in a cooperative,” Uldrich says.

Artificial Intelligence. “No human can make sense of all this data,” Uldrich says. “Artificial intelligence and machine learning algorithms are going to help farmers sift through data to come to powerful insights to help them increase efficiency, productivity and yields.”

CRISPR Gene Editing. By exploiting the immune systems of bacteria to edit or cut and replace sequences of DNA, CRISPR-Cas9 allows genetic alterations to happen faster and cheaper. The revolutionary system might one day protect plants from drought, diseases or insects and help humans fight cancer or eliminate genetic diseases.

Trait Expression. In the past decade scientists have completed sequencing many of the world’s most important food genomes. That coupled with advances in genetic sciences is set to see a surge in new plant and animal traits.

“Some of these robotics today are big, clunky and expensive,” Uldrich says. “In the next decade, robotic technology will get a lot smarter because of sensor technology, artificial intelligence and 5G connectivity.”

Nowhere are robotics more evident than in America’s dairy parlors. By mid-decade milking robots will be a $30 billion business, per a study by Wintergreen Research.

“We’re finding ways to increase yields and pull nitrogen out of the air or the ground so that we don’t have to pay people for those materials for the future,” Uldrich says.

Microbes might reduce pesticide and fertilizer use by 20% in 20 years, according to a report by the American Academy of Microbiology.

Facial Recognition. The increase in computing power combined with machine learning and artificial intelligence is helping producers monitor and track their animals’ every move.

“This software can pick up lameness or variability in the animal about two days before a trained technician,” Catlett says. “Not only can you get better animal health, but it also helps you prove the animals aren’t under stress and they’ve been treated well.”

Fitness Trackers. The common human fitness tracker now has a place in livestock herds. They can track feed or forage consumption, while monitoring behavior around health or even predict estrous or calving likelihood.

Designer Livestock. Like the innovations in crops, genetic modifications thanks to gene editing and CRISPR-Cas9 are poised to have a similar impact on the livestock industry. From fast-growing salmon to China’s recent endeavor to create cold-tolerant pigs, the ability to design animals suited for certain environments and resistant to diseases are a reality today. In a decade they might be the norm.

Scientists and regulatory agencies are studying the long-term effects of modifying major food animals. Groups such as National Pork Producers Council are encouraging policy leaders to improve the regulatory framework around gene-edited animals.

Mega Dairies. From 2008 to 2018, the U.S. lost 17,000 dairy farms. Yet, total cow numbers held, and herd sizes reached a 250-head average. Expect large dairies to continue to grow, and small dairies to diversify or disappear.

“In Texas there’s a dairy milking 100,000 cows,” Catlett says. “If we’ve got 9 million cows in the country then you only need 90 really good dairy farmers to supply all of the country’s milk and dairy needs.”

Food Company and Farm Partnerships. From General Mills to Perdue Farms, major food companies are touting and working closer with their farm partners, hoping to capitalize on consumer preferences and differentiate their products.

“Consumers are going to begin leveraging data to say I want to buy locally grown produce or meat that came from an operation within 60 or 100 miles,” Uldrich says.

Diverging Diets. From Keto to Mediterranean to vegetarian, the American diet is a diverse buffet of preferences and opportunities.

“Some people will always go for the cheapest, most affordable food, and that’s what they have to do, but I like seeing people supporting ag in different ways, which is a really exciting possibility for ag in the next decade,” Uldrich says.

Plant Protein Revolution. Toward the end of the decade, lab-grown and plant-based proteins pushed their way into the meat case. The global plant protein market, estimated anywhere from $8 billion to $18.5 billion in 2019, is forecast to top $40 billion by 2025.

Like other food trends, Catlett expects plant proteins to carve out a 2% or 3% market share. If that’s a global share, it’s still a significant amount of money. Even some of agriculture’s biggest companies, Cargill, ADM and DuPont, are targeting the plant protein market for growth and innovation.

Social Media Mandates. Agriculture can expect keyboard warriors and social media posses to ride hard through the next decade. Be it undercover videos, fanatical posts by pseudoscientists or even viral shares from a perfect day on the farm, the social scene drives positive and negative attention.

The Future Wins of Farming

How will all these innovations change your farm? Our experts predict these benefits:

Lower Inputs. The need for fewer inputs due to advances in genetics or new products could drive down the overall cost of growing a crop or a calf.

Niche Market Access. Farms will likely be able to create their own niche markets and exclusive customer base. Like the growth in farmers markets, “cause clusters” or “grouping” will create opportunities for farmers to sell unique products.

Social Problem Solving. The 1990s brought information via the internet, and the 2000s brought social sharing. In 2020, the two will be fully integrated, helping farmers solve problems and learn new skills.