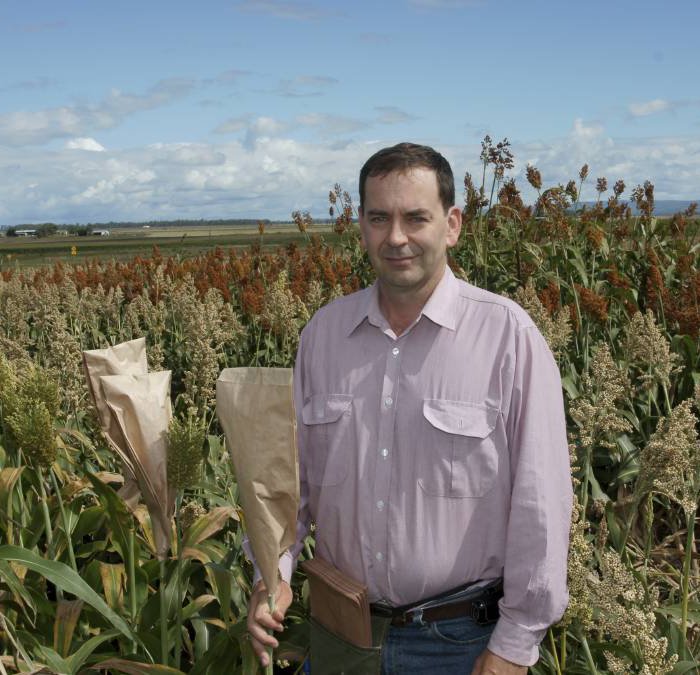 It says genetic material from the publicly-funded national breeding program has, over the past 20 years, been incorporated into every sorghum crop in Australia. This summer crop now encompasses on average 550,000 hectares of Queensland and northern New South Wales.

University of Queensland's Professor David Jordan, who leads the pre-breeding program at QAAFI, says nearly 3000 sorghum lines have been licensed to the international sorghum industry since 1989.

"In recent years, we've licensed about ten times the amount of plant breeding material than all the other public sorghum breeding programs around the world combined," Professor Jordan says.

He says that underpinning this achievement is the program's emphasis on integrated research drawing on a range of scientific disciplines, such as plant physiology, molecular biology and entomology, as well as the private sector.

Now assessing the on-farm impacts of the sorghum research spanning 20 years is a report that puts a dollar figure on its contribution to the productivity, and ultimately profitability, of the major northern region crop.

In recent years, we've licensed about ten times the amount of plant breeding material than all the other public sorghum breeding programs around the world combined
Professor Jordan says economic analysis of sorghum pre-breeding under five research projects from 1997 to 2017 shows investment over this period, totalling $78.4 million, has delivered a gross gain of $696.5 million to Australian sorghum growers.

He says it has delivered a cost-benefit of $8.90 for every $1 invested by the research funders, which include the GRDC, the Queensland Department of Agriculture and Food (DAF) and later QAAFI, a partnership between DAF and the University of Queensland (UQ).

Professor Jordan says the cost-benefits of the research mainly stem from yield gains, estimated at 2.1 per cent per annum.

This estimate is based on Australian Bureau of Agricultural and Resource Economics and Sciences (ABARES) data showing average sorghum yields increased from about 2 to 3.5 tonnes per hectare between 1996 and 2015.

However, he says only about 40 per cent of this yield lift is due to sorghum genetics. Agronomic and farming system improvements have also played a major part.

"About half of the genetic gain is due to pre-breeding germplasm improvements," he says.

"The other half is attributed to private sector breeding companies that use germplasm developed through our program to produce new sorghum hybrids.

"Nevertheless, all commercial sorghum hybrids currently on the market contain genetic material from the program."

Genetic traits that have contributed to the high return on the research investment include insect and disease resistance.

One such trait is genetic resistance to sorghum midge - a mosquito-like fly known to cause total crop failure in susceptible varieties.

DAF senior plant breeder Alan Cruickshank says although development of midge resistance pre-dates the research from 1997 to 2017, emphasis on continual selection for this trait has secured significant, ongoing benefits.

Putting this on-farm cost-benefit into perspective, sorghum generally requires two sprays a year, with an estimated application cost of $13/ha and a chemical cost of $1.70/ha.

"The crop damage that midge resistance prevents in all the hybrid varieties on the market would probably be generating $20 million to $30 million a year," Mr Cruickshank says.

Other traits contributing to the overall increase in sorghum productivity and profitability in the past 20 years are stay-green, which maintains the crop's green leaves and stems when water is limited during grain-filling, and resistance to ergot disease.

Professor Jordan says the next steps in the research effort aim to develop a suite of adaptive traits for better root architecture, water use efficiency, heat tolerance and grain quality.